R : Once I showed somebody some writing. They laughed because I had misspelled the word 'sneer'. That was the very first thing they noticed.
R : Actually, that's perfect. Thank you.
Posted by Rebecca at 00:39 No comments: 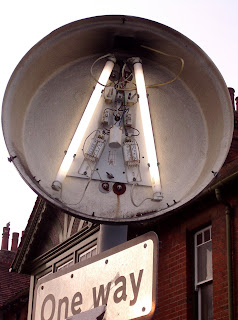 6am, rubbish truck reversing outside my house. Incredible noise, almost sounded orchestral against the deadness of the half-lit morning. This happened mid-way through my tape recording of a song. When I've found a way to put the tape on to the computer, I'll put it up on here. But I want to try and re-create that same lift that the truck noise managed to make in this first rough recording of the song.

Edit
I wanted to add to this now, as Tom has done exactly the above in such a way that it seems now as if he must have been there. The song is 'Breathe'...and we've recorded it now.
Posted by Rebecca at 18:11 No comments: 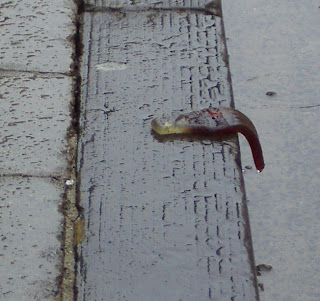 I was late for work and I had to make some difficult decisions.

Very annoying gnat in my bedroom. Making more noise than your average gnat. I was cursing at gnat.
Had been keeping me awake all night. Blamed gnat for lateness.
Gnat noise stops. Strange emptiness without that sound. Reminded me of the time when my friend D and I were walking up Rectory road and I had a wheely-suitcase. And felt a strange combination of uneasiness and relief when I stopped, and the noise of the wheels over the gravelly pavement ceased.
Gnat noise had stopped is in yesterday's cold tea. Already late, but without the gnat noise the relief had turned into uneasiness. I took some tissue paper (the quilted sort, so it wouldn't completely disintegrate....no, actually, that's all I had at the time, but thinking about it now, it was lucky that it was that kind.)
It's true, that you can actually save flies and gnats when they seem to have drowned. He dried off on a leaf and was absolutely fine. Even started flying around.

I was extremely late for work.

It was raining, and as I ran down Holywell Street, outside the Tuck Shop, there was one of those large cola bottles that you get. And someone must have dropped it just off the curb. It looked amazing. Despite now being completely late, I took a photograph. Only one. On a bad camera, trying to balance an umbrella and folders bags.

I retold the story to my boss, who was a little bit intrigued, but seem to mind as long as I made up the time. Which I did happily. It's one of my favourite encapsulated moments.
Posted by Rebecca at 10:13 No comments: